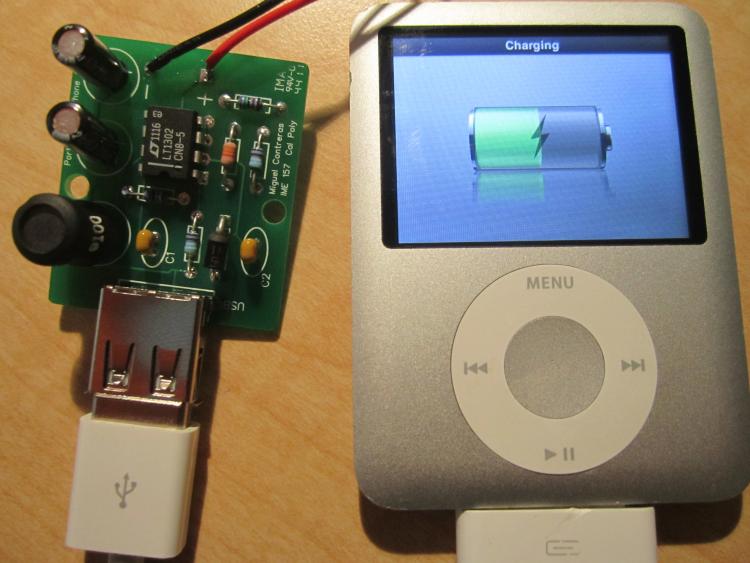 The goal of this project is to design and manufacture our own PCB boards. Designing such boards will help us fully understand the process of electronics manufacturing in a grand scale, but furthermore this project will better prepare us for the corporate world. The project that I have chosen to execute is in essence to construct a portable and convenient cell-phone charging device. This apparatus will be able to charge any cell phone or gadget that uses a Universal Serial Bus (USB) port as a means of recharging its battery life. A key aspect of this design is that it is made in such a way that can portability fundamentally, is its best attribute. Moreover by successfully completing such a project, I will understand the full process of what it is to design and manufacture an electronic device.

This project principal is to develop a cell-phone charging device that is portable. This project idea is based upon a kit by ladyada.net designs. Essentially this piece of equipment will be a powerful USB charger for any mp3 player, camera, but most importantly to play the role of a portable cell-phone charger. The device will need a 5V converter at 500mA that will be an essential part of the process when converting the battery voltage into a usable source. Along with the converter, the gadget will need 2 AA batteries because this category of battery is the more universal kind and offers the best amount of current and voltage. The AA battery that will work best will be a Lithium 1.5V ‘high drain’ AA battery (2900mAh) simply because higher quality batteries will give you longer boost times and provide a more constant stream of current, thus allowing the charger to be compatible with more devices. The charging device will also consist of: power supply capacitor, bypass capacitor, diode, power inductor, USB type A female jack, battery holder, and 5 resistors of diverse values. All the materials needed to create this PCB board use through-hole technology, which will allow me to see first hand a major concept of this course. For the most part, the elements of the cell-phone charger are very small and affordable. The capacitors, resistors, and diode all range from $0.10 to $0.30 each. The 5V converter ranged from $3.20 to $5.00 depending on the supplier. Overall the total cost, including 2 AA batteries should be about $16.00. In brief, this project will fully help me extract what it is to manufacture and produce an electronic device.

How the Cell Phone Charger Works

The cell phone charger originates from a very simple idea. The idea of a battery can charge another battery. In order for this to happen the battery providing the power must be larger than the battery being charged. Or the current being provided must be at a certain degree. For this example I’m going to use the battery of the IPhone 3GS. The original idea from ladyada.net states “9V has 500mAh (for a total of 9*500 = 4.5Wh power) two AA's have 3000mAh each for a total of 2 * 1.5V * 3000mAh = 9Wh, about twice as much power. The only problem is that 2xAA's provide 3V and what we need is 5V. With a 9V battery we can use a linear regulator because 5V < 9V but, sadly, we cant use a linear regulator to turn 3V into 5V. Instead we will need to use a boost regulator (also known as a DC/DC switching/step-up regulator).” In other words, in order to have a sufficient amount of power to boost a cell phone with only 3V of power, something is needed to get 5V out of only 3V. This is where the 5V boost converter comes into affect.

After getting familiarized with Diptrace, we dove into designing and manufacturing a PCB layout of our own. My project was the Portable Cell Phone charger, and since I did not have too much previous exposure to the complete process of designing and manufacturing a board of such level, I decided to take on a project that was feasible in the time permitted. The board design came from ladyada.net, however the components where purchased through Adafruit Industries. The components consist of: 5V boost converter (LT1302CN8-5), power supply capacitor (220uF/6.3+), bypass capacitor (0.1uF), 1/8W 5% 3.3K resistor, 1/8W 1% 75K resistors, 1/8W 1% 49.9K resistors, diode (IN5818), inductor (10uH), universal serial bus type A (female jack), and 2xAA battery holder. My initial goal was to make the cell phone charger as small as possible; and because it must adhere to these rules, the project had reached a new degree of complexity.

The first step in designing a functional circuit board is to create the parts list. I did this through the Component Editor; the Component Editor helps edit the actual part specifications. For example the pinholes, the distance between them, and the component editor also allowed me to name the pinholes appropriately. After the components have been created I then use Pattern Editor to edit what the actual silk layer print out shape of the components will be. For example, the integrated circuit is an eight-pin DIP design; so in order to keep all the holes properly distinguishable, the initial pin must be shaped differently. In my case I made the pin one a square shape. The Pattern Editor also allowed me to place reference designators, polarization of the diode, pad number (especially important for the 5V boost converter), and more general information of the circuit board. This was a key step in the designing process for it determines the way in which I will distinguish between all of the components being placed on the PCB. 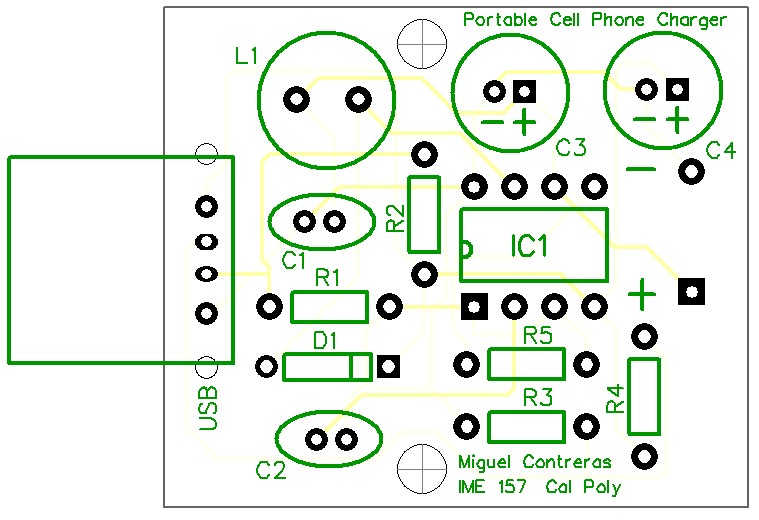 Once all the necessary steps have been met, I then have to connect all my designed components in the Schematic Editor. The Schematic Editor is used to form a functional circuit by connecting all the wires in their appropriate place. This step is very vital, for my design will be based upon the connections made in the Schematic Editor. It’s very important to get the connections right because this can either make our break the project. I then went on to design the actual PCB, and my project limitations where that the PCB can be no bigger than 2 inches by 2 inches. The reason being, as stated earlier, my main focus of the project not only was the professional designing a circuit board, but also making it small enough for the charger to be considered “portable.” With this in mind I then used the PCB Layout Editor, this editor helped place a silk layer screen to determine the components direction, reference designators. The last step is to check its net connectivity, design rules, and comparing it to the schematic layout. If all these tests past, including the approval of Dr. Pan, the Gerber files of the PCB layout design is now ready to send for manufacturing.

Before the commencement of the PCB design, the chassis must always be in mind. What is the design limitation? What material best suites the design? How will the design benefit from the chassis? All these questions must be answered before anything can be created. The reason for this is because of I didn’t know what I was going to place my design in, how will I know how big it must be. Furthermore, once all this was planned out, I was confident in moving on to the next step of my cell phone project design. The chassis that would be suite my design, I decided, would be an acrylic material. The reason why I chose this material was because acrylic plastic is a material that is very resistant to heat, and I know that the 5V converter will generate heat after a while of being active. The converter will be converting 3V to 5V, so my initial concern was a material that could withstand such characteristic. Of course a wide range of materials qualify for such a thing, now, my second goal was to make it appear unlike any other portable charging devices. 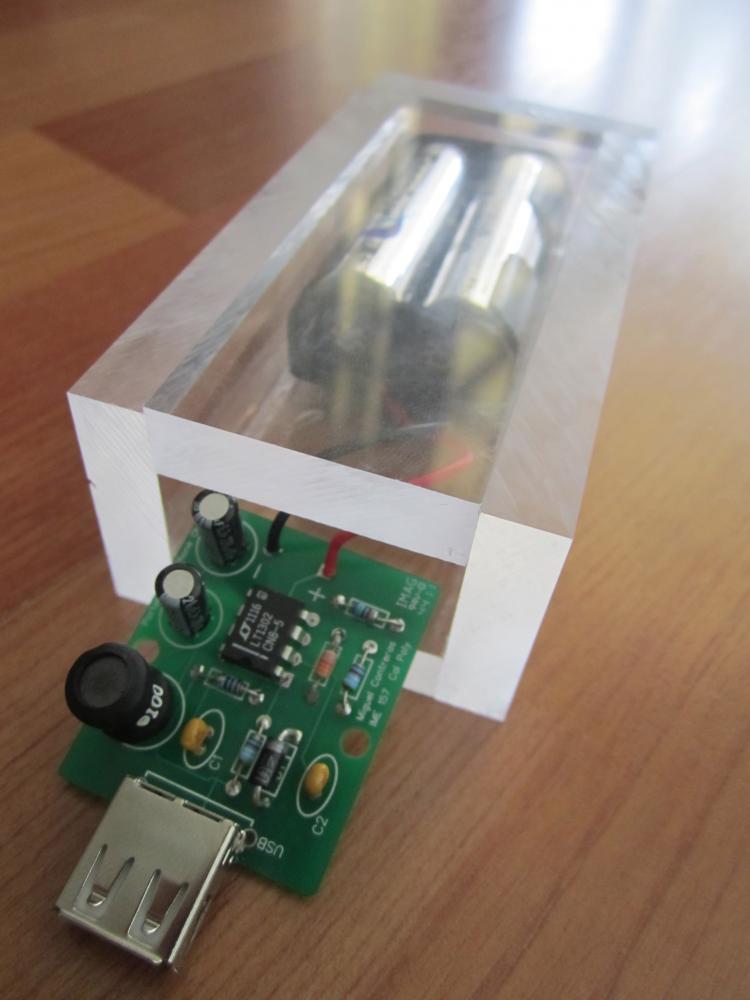 The acrylic plastic offered me the heat capacity I needed; however, it also allowed for me PCB to be displayed in a see-through material. This way the user will be able to see all the routing connections, components, and the converter working simultaneously to successfully charge a device. Acrylic plastic will also make the portable cell phone charger stylistically unique from any other commercial chargers. The acrylic plastic was roughly $17.00, including extra material in case any bugs where to arise. The material was purchased from a company in Stockton named TAP Plastics.

In conclusion this project has been very successful. I did come across some troubleshooting in a couple occasions. The first occasion was when I had to designing the PCB. The chief problem with the design was perfectly measuring the Universal Serial Port. The USB was the most complex component of all of them, primarily because the component had six components through holes. Initially I finished the PCB design, however when I scaled to 100%, the USB was the only components that the copper holes did not perfectly match up. So recommendation for this component would be to have the measurements properly measured before production. Check double check, and when you think your done, check again.

The second issue was the chassis development. During the development of the chassis, the acrylic plastic had to be cut to precise measurements. The main cut was the opening where the USB was going to be placed in between for support. The first cut did not come out to the specifications; luckily I had ordered extra pieces in case this crisis would come up. The second time around the cut was perfect.

Overall this project served as a means to get us exposed to the process of designing, assembling, and manufacturing a professional circuit board. In addition to getting familiarized with these areas, we also got to make our own chassis. Which included attaining knowledge in working with acrylic plastic material along with the tools necessary to manipulate such a material. This project provided a lucid understanding to the overall process of creating a professional grade electronic product.